It is almost light outside. It must be about six. He’s been awake half the night trying to figure out what to do. Lying on his bed, he stares through the rotating blades of the ceiling fan which only serve to stir the close warm air of his room. He needs to think – he’s running out of time. But his eyes feel salted and his head throbs.

BEGIN YOUR DAY AT DISHOOM with breakfast, which might be a Bacon Naan Roll, a Kejriwal or a Big Bombay. Then lunch lightly on Roomali Rolls and Salad Plates, or linger with a feast. Refresh your afternoon with a drop of Chai and a small plate or two. Dine early or dine late. Or just join us for a tipple - perhaps an India Gimlet, a Permit Room Old-fashioned, or our very good Dishoom IPA?

Our all new café has arrived

Our all new café has arrived

With greatest delight, we are beyond excited to share that the brand-new, most fine and gorgeous Dishoom Canary Wharf is now open!

Our newest home, nestled in a little corner of Wood Wharf, will bring to life the glittering-shimmering, big-business, metropolitan scene of ‘70s Bombay. When fortunes were made and lost, swindles plotted and uncovered, and dreams were dreamed and broken.

How to find us

Kindly see a rather handy map below and be sure to follow signs for Wood Wharf. 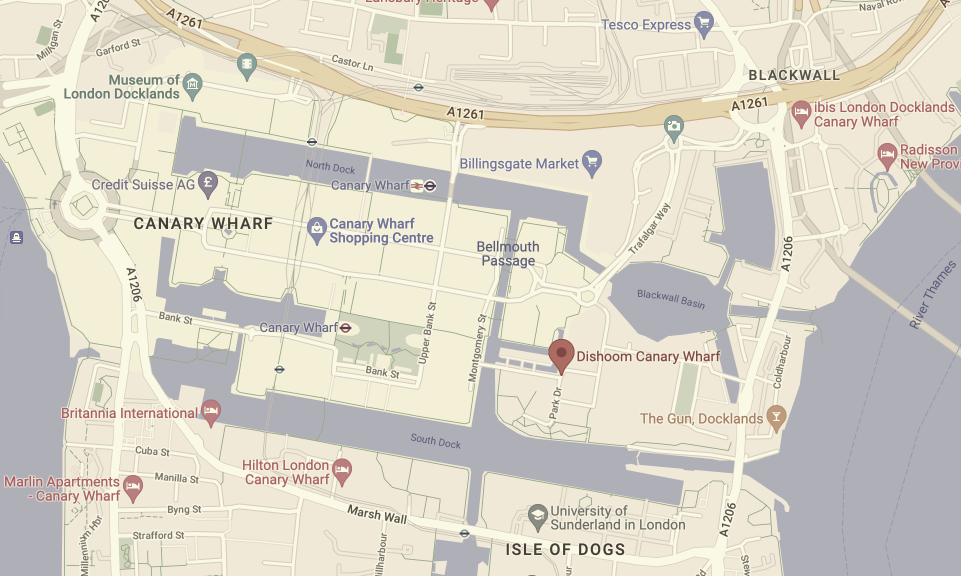